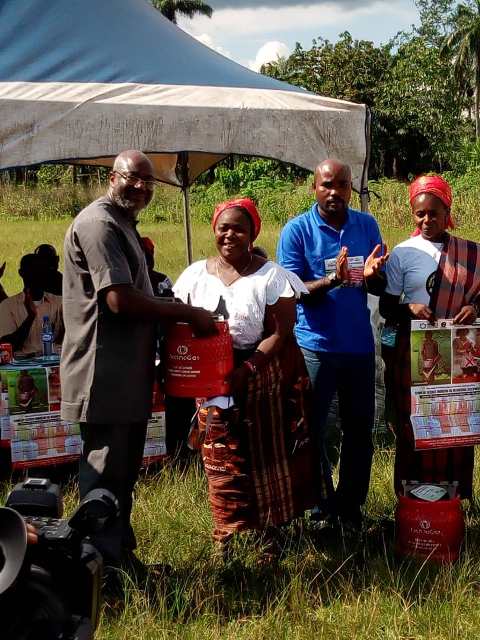 UKAID/Department for International Development (DFID) under its Modern Energy Cooking Services -Technology Research Innovation for International Development [MECS-TRIID] in conjunction with the Centre for Climate Change and Development, Alex Ekwueme University, Ebonyi State, has partnered with Techno Oil for the Enhancement of LPG, distribution and re-circulation of Techno Oil LPG cylinders to two rural communities in the East.

This project is aimed at pushing the drive to boost LPG access and adoption in the Nigerian semi-urban populations. “The project will pilot Techno Oil LPG cylinder re-circulation model in two South-Eastern Communities of Arondizogu and Okpanku in Imo State and Enugu State respectively,

According to The Project Director, Prof Chukwumerije Okereke, the project’s “immense potential is to contribute to efforts by the Nigerian Government and international donor partners to scale up the use of modern cooking services in millions of homes in Nigeria”.

Professor Okeke added that the partnership with Techno Oil will see the distribution of Techno Oil branded 6kg cylinders to the two communities in Imo and Enugu States. He said the Project will adopt the ‘TechnoGas Swap N Go’ cylinder refill, exchange and distribution model.

“Training and awareness programmes will be provided to the beneficiaries and the larger communities on the manifold benefits of embracing modern household energy services and the use of LPG,” he added .

According to the Director, the broad objective of the project is to establish the extent to which incentives-based, cooperative-group-influence cylinder recirculation model can encourage women in these two communities to move away from health and environmentally damaging ‘dirty cooking’ towards cleaner cooking with LPG.

The Executive Vice-Chair/CEO of Techno Oil Limited, Mrs Nkechi Obi MON, enthused: “Techno Oil Limited, as a leading pro-poor modern energy service provider in Nigeria is proud of its modest history of providing target-specific support to advance clean cooking objectives in Nigeria and will be glad to be part of the success story of this and future pro-poor clean cooking initiatives”. She said that Techno Oil had remained consistent in its drive to popularize cooking gas, saying that the company would sustain its vision of being a Nigerian company with global aspiration. Mrs Obi believed that the award would propel Techno Oil to work assiduously to make LPG the energy of choice among Nigerians in their cooking needs.

According to her, Techno Oil has a dream to advance clean cooking in Nigeria and other countries in West Africa to secure the environment for people residing in the sub-region.

Mrs Obi added that the company has set plans in motion to deepen LPG consumption with the building of an LPG cylinder manufacturing plant, to roll out Techno Oil cylinders that remain buyers’ preference, because the quality of Techno Oil cylinders meets global standards and they are better than 95 per cent of the substandard cylinders in circulation. Obi, a long-time advocate of LPG adoption, lamented that continued importation of cylinders had been hurting Nigerian industrialists, engaged in cylinder manufacturing.

She  restated the dangers associated with using solid fuels such as charcoal, wood, kerosene and other inefficient energy sources, saying that “LPG is the way to go for every home in Nigeria and Africa’’